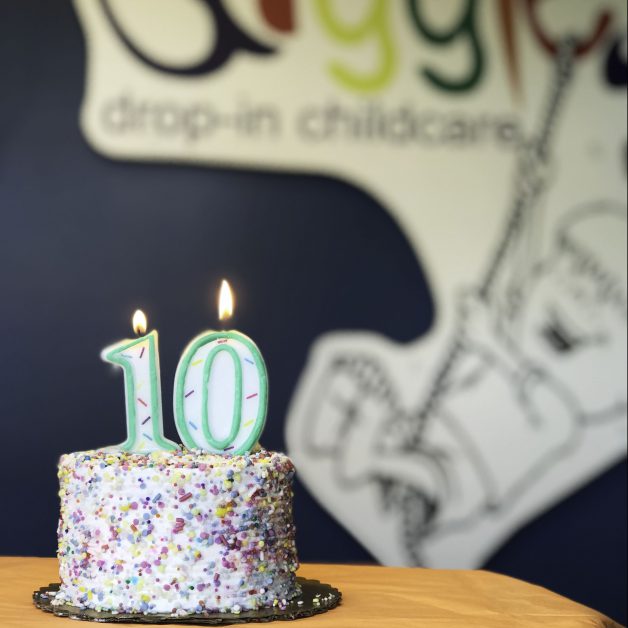 From twelve months to twelve years, it is  more than just ten years.  It is more than just the time that has passed.  It is a decade full of memories, growth, exploration, creativity, and lots of play time along the way.  It is a period filled with imagination, obstacles, and learning as we went.  Looking back on it all, we are so grateful for ten years of Giggles.

Kitchen Tables.  The origin of some of the best ideas.  When two working parents were faced with the need for reliable care they were introduced to the drop-in style childcare.  Their experiences led them to building upon the concept in hopes to help other parents with their need for more free time.  “This became our mission, to offer childcare that was convenient, reliable, safe, and that operated at a  higher standard.”  And, so, Giggles was born!

Like any new business, this one needed a name!  After many brainstorming sessions, a name for the new business was seeming close to impossible.  That is, until the very one who had sparked the entire idea of the new business also sparked the idea for the name.. “Our son was about one, and he had the most contagious, and full hearted giggle that just consumed his face and spread to everyone else that was in the room”.  The two parents then realized, “This was something that we wanted to capture, and to hear, from all the children that we cared for”.  In a business that was created with him in mind, it is only natural that he played such a vital role in one of the biggest decisions!

Swaying away from the norm of traditional childcare and taking the route of drop-in childcare instead, still a fairly new concept at the time, was an easy choice to make.  The stigma that is associated with traditional daycare environments is not what our founders had in mind when they envisioned their own space.  The idea was to create a place that kids loved to enter into, and parents could feel at ease when taking some time for themselves- “We love being able to offer kids something that is just fun and that offers parents complete flexibility”.  Achieving that took a lot of careful planning, and placing kids best interest at the top of the priority list!

The planning eventually paid off, and it is now a personal favorite of our founders to see the reaction of first time families; “I love the reaction when parents drop off for the first time.  Often, by the time the parents finish the registration, the kids are playing and don’t even want to say goodbye”.  By creating an environment that is both fun, and safe kids are excited to play and explore the center, and, typically, the parents are shocked and surprised that it really is that easy!  The first reaction does not end at drop off, no, it doubles at pickup; “When the parents return to happy kids still playing and begging to stay a little longer, the parents are thrilled!”.  The idea of a company slogan was first toyed with as “the only problem you’ll have is getting your kids to leave”, but after seeing all of the possibilities that the company could offer the current slogan of “Play time for them, free time for you” was adopted.

Adding an appealing twist to the center was one thing that our founders knew was necessary in making our centers stand out from the rest.  While on a trip to the most magical place on Earth- AKA Disney World-they gained the inspiration that they had been lacking.  The family explored The Swiss Family Robinson exhibit, and allowed the attraction to spark their own imagination.  With the help of a very artistic friend, Matthew J Leavell, the very first Giggles Treehouse was born; “We told him what we wanted to do, and he made it a reality. His work and attention to detail was absolutely amazing.” Each of our locations have a treehouse that is unique to the center itself, and while we have since worked with many other talents, we are grateful to the one who first helped our childhood dreams become a reality.

Sharing lots of smiles, hugs, sweet faces, and giggles are what we love to experience with all of our families!  A family who loved their experience, and wanted to share it with others- that is how our very first franchise location was born.  It was revealed that “they always felt a good feeling when they came in, and they wanted to own a business like that”.  To date, we have five locations in two states, and plan to expand to many more locations this year!  “We are excited to bring our services to many, many, many, more families!”

With so many families, there are countless stories of how we have been able to help them gain back free time, but they are all priceless.  One story in particular stands out to our founder, as of the “most memorable, and rewarding experiences” for her.  As she recalls, “The mom dropped off her young girls.  She had just moved here, her husband was deployed and she didn’t know anyone.  She was thrilled to be able to get a little break. She became a part of our Giggles family, and we grew to love her and her girls.  When her husband came home on leave, he came in to pick up the girls.  He looked me in the eye and shook my hand and told me how much it meant to him that his wife had some help while he was gone and that his girls had a place to play that they loved.  He said he couldn’t thank us all enough, and I have never forgotten it.”  There are so many more of stories similar to this, and we bet that if you can think of it, we have helped with it!

For all of our families that have helped fill the last ten years with so many wonderful Giggles, thank you; “we understand how important your kids are to you and we are honored that you allow us to be a part of your lives”